Death is a Welcome Guest by Louise Welsh


Louise Welsh is a writer living and working in Glasgow, Scotland, and the author of
six novels.  She was writer in residence for The University of Glasgow and Glasgow School of Art from Nov 2010 until April 2012.  This is the first book I have read for my Read Scotland 2016 challenge. 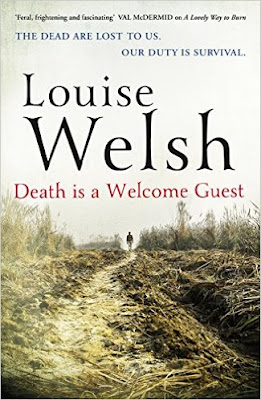 Death is a Welcome Guest is the second book in Louise Welsh’s Plague Times Trilogy.  The first book in the trilogy, A Lovely Way to Burn, introduced the plague named “the sweats”.  This pandemic is now sweeping across the whole world killing indiscriminately.  This book introduces Magnus McFall, a young Orcadian comedian who is working in London.  He ends up in prison after trying to save a young woman from being raped.  Here he meets Jeb, an enigmatic prisoner, and together they manage to escape.  They leave London and end up staying in a large country house which is being run as a community, led by an army chaplain. The author describes the tensions which arise in this community very well. Eventually, Magnus, Jeb and some other survivors set off north towards Orkney.  By the time they reach the north coast of Scotland only Magnus and a young boy are left as the others have decided to stay further south.  Magnus is hoping to find some surviving family members in Orkney.  When he comes ashore on one of the Orkney Islands he is greeted by a woman with a rifle.  She tells him there is no-one with the name of McFall on the island.


Magnus would have liked to have filled his pockets with stones and walked back into the water, but he had the boy to think of and so he followed her, over the dunes, towards the road.
I hope that we find out what happens to Magnus in the next book – he is a likeable character who does try to act properly despite the lawlessness of the new society.  He is loyal and looks after Jeb when he breaks his leg.
I found this book interesting as it raised questions about how a society would cope after such a catastrophe which sweeps away all the trappings of civilisation.  Are people able to go back to an earlier way of life?  Do they have the practical skills to grow their own food and organise themselves or will society break down completely? The quotes from Edwin Muir’s poem The Horses were very appropriate.

Email ThisBlogThis!Share to TwitterShare to FacebookShare to Pinterest
Labels: Death is a Welcome Guest, Louise Welsh