We Shall Inherit the Wind by Gunnar Staalesen

Gunnar Staalesen is a new Nordic Noir author for me.  He was born in Bergen in 1947 and has written over 20 books.  So far only a few of Staalesen's books have been translated into English.  I decided to read We Shall Inherit the Wind as I thought this was the first in the Varg Veum series which features a private detective of that name.  However I have since discovered that this is quite a recent one.  The others which have been translated into English are Yours Until Death (1979), At Night All Wolves are Grey (1986), The Writing on the Wall (1995), The Consorts of Death (2006) and Cold Hearts (2008). 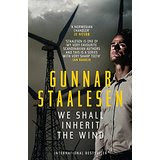 Staalesen writes about topical issues and We Shall Inherit the Wind is no exception as one of the themes of the book is wind energy. Varg Veum is asked to investigate the disappearance of a businessman, Mons Maeland, who is planning to build a wind farm on a remote island.  However it seems that he had changed his mind about this shortly before he disappeared.  Maeland's family are divided about this development - his son Kristopher is very much in favour but his daughter is a member of an environmental group opposing it.  There is another mystery associated with Maeland - his first wife disappeared many years ago and then he married again.  When Maeland's body is found on the island, it seems a number of people have a motive for his murder.

I really enjoyed the book and liked the character of Veum.  However I think I would have understood his character better if I had read some of the earlier books in the series.  I liked the format of the lone investigator and Varg seems a suitable name for him as it means "wolf" in Norwegian.  Veum was extremely determined in his pursuit to find out what happened to Maeland's first wife.

There is a religious strand running through this book and the language used emphasises this. The title of the book comes from this quotation from the Bible "He that troubleth his own house shall inherit the wind: and the fool shall be servant to the wise of heart." (Proverbs 11:29)

Staalesen's descriptions of the island are excellent.  His description of a large wooden cross on the island builds up suspense leaving the reader in no doubt that something awful is going to happen here.  "But there was nothing to explain why it was there and what it was supposed to symbolise.  In its silent way it still gave me an indefinable sense of unease, a warning that something was about to happen."

I could identify with the topic of wind farms as there are plans to build a large wind farm in Shetland, where I live.  As in the book, public opinion is divided about this.

Veum managed to solve both mysteries although I am unsure about one of them - without giving too much away I felt that it was a bit far-fetched.  However I am looking forward to reading more books in the Varg Veum series.

Email ThisBlogThis!Share to TwitterShare to FacebookShare to Pinterest
Labels: Gunnar Staalesen, Nordic Noir, We Shall Inherit the Wind