I seem to be having some difficulty in keeping to the schedule of reading a few chapters of The Pickwick Papers every month.  I find I have lost the thread of the story by the time I read the next section and have to re-read some to remind myself what happened in the previous one.

Chapter 6 finds Mr Pickwick and his friends enjoying the hospitality of Mr Wardle and his family.  After playing some games of cards, the assembled company is treated to the recitation of a poem "The Ivy Green" and the story of an escaped convict by the clergyman which highlights how hard conditions were for many people during the Victorian period.

Chapter 7 was more humorous describing the attempts by Mr Winkle to shoot rooks - the end result was that the rooks escaped unharmed but Mr Tupman was shot in the arm.  As Dickens say,  "Mr Tupman had saved the lives of innumerable unoffending birds by receiving a portion of the charge in his left arm."  Mr Pickwick and his party go off to watch a cricket match leaving Mr Tupman to the tender ministrations of the spinster aunt. The stranger appears again introducing himself as "Alfred Jingle, Esq, of No Hall, Nowhere".  After the cricket match the party go off to the Blue Lion Inn where they enjoy a good meal and drinks. 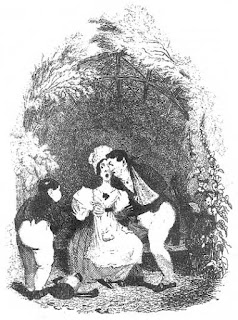 Chapter 8 describes how the friendship between Mr Tupman and Miss Wardle progresses swiftly to the stage where Mr Tupman declares his love for the lady by seizing her hand and saying "Oh, Rachael! say you love me." He then proceeds to kiss her - unfortunately being spotted by the fat boy who "for once, had not been fast asleep.  He was awake - wide awake - to what had been going forward."  The fat boy informs the old lady of this but unfortunately is overheard by Mr Jingle who suggests to Mr Tupman that he should pay all his attention to the niece instead of the spinster aunt thus disproving the fat boy's story. Mr Jingle assures Mr Tupman that he will explain everything to the spinster aunt.  At the end of the chapter Jingle borrows ten pounds from Mr Tupman promising to pay it back in 3 days.  I wonder what he needs the money for and whether Mr Tupman will ever be repaid?


This chapter also describes the Pickwickians and Mr Jingle coming home from the cricket match.  The descriptions are funny as is the illustration which describes "Mr Wardle and his friends under the influence of the salmon."  As Mr Snodgrass says, "It wasn't the wine." 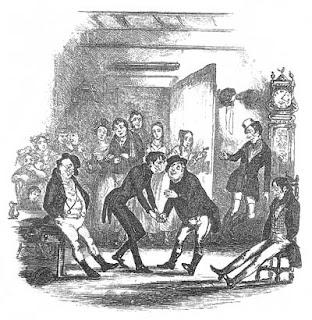 I felt this section was good in parts - I still feel it is very disjointed compared to Dicken's other novels.  However this is probably due to the format of The Pickwick Papers as it consists of lots of episodes.  Robert L Patten explains in his introduction to my copy, after Part 3 Dickens assumed more control of Pickwick and the increase in the letterpress to 32 pages per section and a decrease in illustrations to two gave Dickens more scope to develop his situations.  I hope this change of format will increase my enjoyment of the book.

The illustrations are from Robert Perdue's Charles Dickens Page.
Posted by Margaret at 13:56