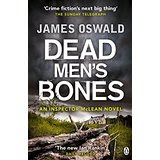 Dead Men’s Bones is the fourth book in the series featuring DI Tony McLean written by the Scottish author James Oswald who combines a successful writing career with farming.
The book begins with the discovery of a naked body in a river outside Edinburgh – the body is male and covered with tattoos.  DI McLean hardly has time to start investigating this suspicious death when he is sent to the home of an MSP who has been found shot in the grounds of his house in Fife.  Inside the house the police find the bodies of the MSP’s wife and two young daughters. It looks like the MSP killed his family before committing suicide.
It appears that DI McLean has been allocated this case because it is political hot potato and his superiors do not want to be associated with it.  He has a reputation for being a bit of a maverick who can be dispensed with should he discover anything which would reflect unfavourably on the government.
Like all the books in this series, this is a police procedural story but with a supernatural twist at the end which makes these books different from most current crime novels.
What I particularly enjoyed about this book:-
·       The development of the characters during the series – I especially like DI McLean who comes across as very human – his strong sense of justice drives him to solve cases even if he annoys his superiors in the process; he is a good team leader who cares about the members of his team as people; he also cares about the less fortunate members of society as his treatment of the homeless ex-soldier demonstrated
·         I liked the descriptions of Edinburgh and the surrounding area – having lived in the city for 8 years I could picture the various locations in the book
·         McLean’s relationship with his superior Duguid seems to be slightly better in this book – I did find that their constant battles were becoming a little boring and repetitive
·        The ending was very exciting when DI McLean realises that his team are in danger and goes to check on them
·        The story was cleverly plotted with various layers including the involvement of a mysterious man from the Special Branch who encouraged McLean to keep on investigating the case of the MSP
Posted by Margaret at 12:36