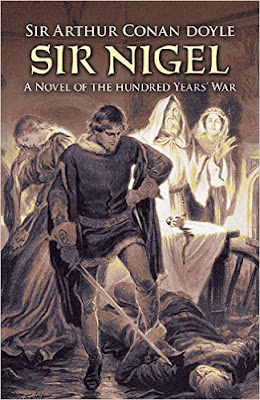 I read Sir Nigel by Sir Arthur Conan Doyle recently at my “Lunch with Dickens” book group and it is also one of my 50 books to read for the Classics Club book challenge.  Sir Nigel was written in 1906 and is a historical novel.  It is set between 1350 and 1356 during the Hundred Years War and describes the early life of a young English squire, Nigel Loring, up to the time when he is knighted.  It is the prequel to the White Company although at the end of Sir Nigel we find out what happens in his later life.


Nigel becomes a squire to Sir John Chandon and goes off to fight in France.  Before leaving he promises Lady Mary that he will perform three deeds of honour so that he can be worthy of her hand in marriage.


I enjoyed the book which was well written – the use of use of medieval words and phrases give a flavour of the times but without posing any problems to understanding the story.
The book was fast moving and funny in parts.  Sir Nigel was an honest, brave young man who wanted to do his best for his king and for Mary.  It was interesting to find out about the strict rules knights had to follow.  I enjoyed the description of the English sneaking into the castle of the Butcher of La Brohinière through the tunnel. Parts of the story were quite bloodthirsty especially the descriptions of how the dead were treated and how the archers went around gathering back their arrows from the battlefield.  However, life was very different in the 14th century.
Here are some quotes which give a flavour of the book.
"Over the winding river, across the green meadows, rose the short square tower and the high grey walls of the grim Abbey, with its bell tolling by day and night, a voice of menace and of dread to the little household."
"There are two seasons of colour in those parts: the yellow, when the countryside is flaming with the gorse-blossoms, and the crimson, when all the long slopes are smouldering with the heather."
"The visors had been closed, and every man was now cased in metal from head to foot, some few glowing in brass, the greater number shining in steel.  Only their fierce eyes could be seen smouldering in the dark shadow of their helmets.  So for an instant they stood glaring and crouching."
Sir Nigel is very different from the Sherlock Holmes novels but Conan Doyle thought his historical books were some of his best work.  I will certainly read The White Company sometime. 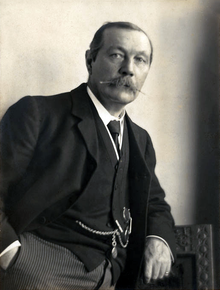