In chapter 12 we find out about Mr Pickwick's abode in London.  "Mr Pickwick's apartments in Goswell Street, although on a limited scale, were not only of a very neat and comfortable description, but peculiarly adapted for the residence of a man of his genius and observation."  These apartments seemed to suit Mr Pickwick as there are no children, no servants and no fowls.  Much of this chapter is concerned with a misunderstanding between Mr Pickwick and his landlady, Mrs Bardell.  He tries to tell her that he is planning to employ a manservant but Mrs Bardell thinks he is proposing marriage.  She faints in his arms just as the other Pickwickians arrive. 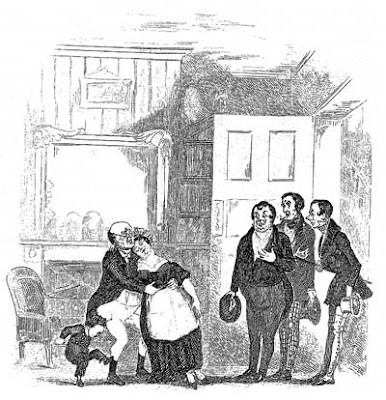 "Mr Pickwick was struck motionless and speechless.  He stood with his lovely burden in his arms, gazing vacantly on the countenances of his friends, without the slightest attempt at recognition or explanation.  They, in their turn, stared at him; and Master Bardell, in his turn, stared at everybody."

Mrs Bardell is escorted downstairs by Mr Tupman just as another man enters.  This is Sam Weller whom Pickwick decides to employ.  Sam is happy to leave his present employment at the White Hart Inn although he is a little confused about what his new role will be when he is given his new clothes.  "Well," said that suddenly-transformed individual, as he took his seat on the outside of the Eatanswill coach next morning; "I wonder whether I'm meant to be a footman, or a groom, or a gamekeeper, or a seedsman.  I looks like a sort of compo of every one on 'em.  Never mind; there's change of air, plenty to see, and little to do; and all this suits my complaint uncommon; so long life to the Pickvicks, says I!"

Chapter 13 consists of a humorous account of an election for the Member of Parliament to represent the borough of Eatanswill.  There were two candidates involved in this election - Samuel Slumkey representing the Blues and Mr Fizkin, the Buffs. The Pickwickians arrive in Eatanswill to find the town buzzing with election fever.  They decide to align themselves to the Blues as Mr Perker, the lawyer, is the agent for Slumkey.   The election seemed to involve a lot of buying of votes including parasols for the ladies "at seven and sixpence a piece".  Slumkey was expected to shake hands with "washed men" and pat children on the head.  His agent wanted him to "kiss one of them as it would produce a great impression on the crowd."  Politicians are still keen to be photographed with children - however bribing women with parasols no longer happens!

Most of chapter 14 consists of a strange tale entitled The Bagman's Story which is told by a bagman (a commercial traveller).   This is the tale of another bagman, Tom Smart, who stops at an inn where he takes a fancy to the landlady who is a widow.  However he believes that another man is also keen to make the landlady his wife.  Tom is quite annoyed about this but thinks he can do nothing about it so goes to bed. In the bedroom there is "a strange, grim looking chair" which Tom cannot take his eyes off.  Tom dozes off and wakes with a start to see that a change had come over the chair and that it now looked like an old gentleman.  The chair/gentleman is able to speak and proceeds to give Tom information about the landlady and about how he can win her hand in marriage.

A strange ghost story but one which has a happy ending!