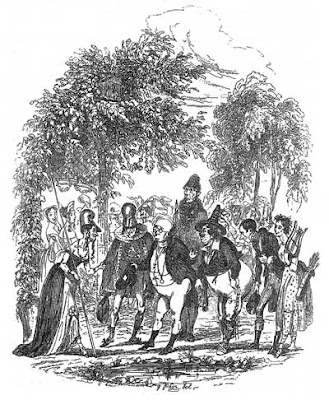 In chapter 15 Mr Pickwick and his friends are invited to a public breakfast being given by Mrs Leo Hunter, the celebrated author of the poem, "Ode to an Expiring Frog" which had created quite a sensation when it was published.  Although this event is a fancy dress affair, Mr Pickwick is allowed to attend in his usual attire while his friends are dressed by Mr Solomon Lucas, "the Jew in the High Street".  I found this chapter quite humorous especially the description of Mrs Hunter with her daughters who were dressed "in very juvenile costumes - whether to make them look young, or their mamma younger - Mr Pickwick does not distinctly inform us."  The guests were just making their way into breakfast when Mr Leo Hunter announces that Mr Charles Fitz-Marshall has arrived.

"Mr Pickwick's knife and fork fell from his hand.  He stared across the table at Mr Tupman, who had dropped his knife and fork, and was looking as if he were about to sink into the ground without further notice."

The new arrival, of course, is Mr Jingle who leaves hastily on being presented to the Pickwickians. The chapter ends with Mr Pickwick and Sam pursuing Mr Jingle to Bury St Edmunds where he is staying.  Mr Pickwick says, "How do we know whom he is deceiving there?  He deceived a worthy man once, and we were the innocent cause.  He should not do it again, if I can help it: I'll expose him!"

Chapter 16 is described as being "too full of adventure to be briefly described".   The chapter starts by extolling the virtues of the month of August.  "A mellow softness appears to hang over the whole earth; the influence of the season seems to extend itself to the very waggon, whose slow motion across the well-reaped field, is perceptible only to the eye, but strikes with no harsh sound upon the ear."

Mr Pickwick and Sam arrive at the inn where Mr Jingle is staying.  In the morning, Sam strikes up a conversation with Mr Jingle's manservant, Job Trotter who confides to Sam that his master is planning to run away with a rich heiress from a local boarding school.  As Trotter feels that the lady would not believe what anyone said about her lover, a plan is drawn up to stop the couple eloping.  Mr Pickwick is to arrive at the school at half past eleven and knock on the kitchen door which will be opened by Trotter.

Everything that could go wrong does go wrong - Mr Pickwick has to be pushed over the wall by Sam ending up amongst gooseberry bushes.  There is a thunder-storm and Mr Pickwick is concerned that he is in a dangerous situation being surrounded by trees. He tries to get back over the wall but "the only effect of his struggles was to inflict a variety of very unpleasant gratings on his knees and shins, and to throw him into a state of the most profuse perspiration."

He knocks at the kitchen door which opens to reveal the teachers and boarders of the school.  Mr Pickwick comes out of his hiding place and tried to explain why he is there.  The women take him for a robber or a lunatic and lock him in a cupboard!  Eventually Mr Pickwick is rescued by Sam and Mr Wardle who happens to be in the area for some shooting.  The chapter ends with Mr Pickwick stating that whenever he meets Jingle again he will "inflict personal chastisement on him, in addition to the exposure he so richly merits."﻿

Mr Pickwick's exertions result in an attack of rheumatism which confines him to bed for a few days.  However  he is not idle and spends his time writing a tale entitled "A Tale of True Love" which forms most of chapter 17.  I am still not convinced that these tales add anything to the book. 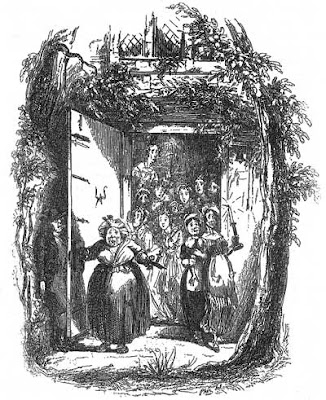