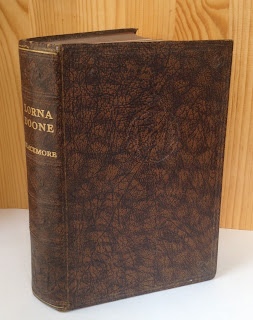 Lorna Doone was written by R D Blackmore and published in 1869.  Although Blackmore wrote a number of novels, this is the only one still in print.  It is set in Exmoor in the 17th century during the reign of Charles II and tells the story of John Ridd who falls in love with Lorna Doone, a member of a notorious band of outlaws.  The introduction to my copy said, "Blackmore has done for Exmoor what Scott has done for the Highlands, Hardy for Wessex or Crockett for Galloway."  It is a historical novel and deals with the Monmouth Rebellion, a period of history I know nothing about.

The descriptions of the countryside, the seasons and the farming activities are excellent.  I liked the descriptions of the very long hard winter in chapter 42.  Here is what the author says about the snowstorm which was covering everything.  "This great drift was rolling and curling beneath the violent blast, tufting and combing with rustling swirls, and carved (as in patterns of cornice) where the grooving chisel of the wind swept round.  Ever and again, the tempest snatched little whiffs from the channelled edges, twirled then round, and made them dance over the chine of the monster pile, then let them lie like herring-bones, or the seams of sand where the tide has been.  And all the while from the smothering sky, more and more fiercely at every blast, came the pelting pitiless arrows, winged with murky white, and pointed with the barbs of frost."

I did find this book quite difficult in parts and felt it would have benefitted from some judicious editing. I was also irritated by the narrator's sentimental language when he was describing "his Lorna".  I didn't like some of the narrator's comments about women and had to keep reminding myself that this book was written in the 19th century.  At one point John Ridd says, "I always think that women, of whatever mind, are best when least they meddle with the things that appertain to men."
I was glad I had perservered with Lorna Doone as it is one of the classics.  I have downloaded another one by Blackmore entitled The Maid of Sker which is available as an e-book.  This book is set at the end of the 18th century, and the narrator is an old fisherman. The story tells of a two-year-old girl who drifts in a boat onto a beach in Glamorganshire in the calm before a storm.  It will be interesting to see how this compares to Lorna Doone. 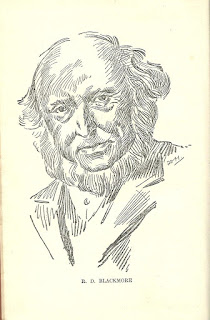