Roseanna by Per Wahlöö and Maj Sjöwall

Roseanna is a detective novel written by the Swedish husband and wife team Per Wahlöö and Maj Sjöwall.  The story, which is the first in a series, is set in Sweden and was published in 1968.  The story opens when the naked body of a woman is dredged from a canal leading to a long investigation to find out the identity of the woman and how and where she was killed. Detective Inspector Martin Beck, from Stockholm, is drafted in to assist in the investigation.  The case is complicated by the fact no-one matching the woman's description had been reported missing.

This is not a book for anyone looking for a fast moving, action packed story.  In fact the book shows how much detective work is very boring and painstaking and takes a long time.  It was also interesting that the detectives find out who the dead woman was and manage to solve the case without the benefit of modern technology. 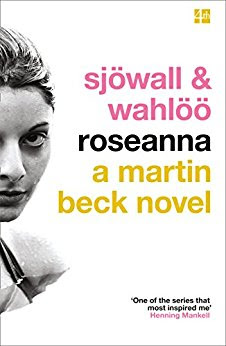 I enjoyed the book and in particular liked the character of Martin Beck with all his ailments and unhappy home life. He comes across as an ordinary hard-working police officer.  He is not a demonstrative character - in fact he seems to be able to disappear into the background. "Martin Beck had a way of slinking through a door which irritated a number of people.  Someone once said that he was able to slip into a room and close the door behind him so quickly that it seemed as if he were still knocking on the outside."

Time is a theme running through the book and we are constantly reminded about the lack of progress in the case by the changing weather and seasons.  It takes months before the body is identified as an American tourist who had been on holiday in Sweden.  The detectives find out that Roseanna had been on a ship when she disappeared.  As her fellow passengers came from all the world, it was a huge undertaking to interview them all. At this point, "the case had reached a point where it was going on its own pretty much at the same time as it was spreading itself all over the globe."  However Martin is determined to find out who had killed Roseanna as "he felt sorry for the girl whom no one had missed."   Eventually after more determined detective work, the murderer is caught.

According to the reviews,  Wahlöö and Sjöwall were influential in development of the crime fiction genre which is so popular nearly fifty years later.   Henning Mankell says in the introduction to the book that "it still holds up today.  It's lively, stylistically taut, and the unfolding of the story is skilfully planned."  He describes it as a modern classic.

I certainly plan to read more books in the Martin Beck series.