At the beginning of chapter 18 the Pickwickians are still waiting to hear from their revered leader.  Mr Winkle is staying in Mr Pott's house and is able "to devote his time to the companionship of his amiable lady."  On coming down to breakfast, Mr Winkle is met by a very irate Mr Pott who has been angered by an article in the Independent, relating to his private life, quoted below.


LINES TO A BRASS POT
"Oh Pott! if you'd known
How false she'd have grown,
When you heard the marriage bells tinkle;
You'd have done then, I vow,
What you cannot help now,
And handed her over to W*****"
Just as Mr Pott is asking Mr Winkle what rhymes with tinkle, his wife appears and provides the answer quite oblivious to what is going on. Once Mrs Pott reads the offending article, she goes into hysterics. Mr Winkle decides to leave the Potts to sort out their marital differences, saying he has received a letter from Mr Pickwick who is expecting him at Bury.
"The breakfast passed off in silence, for each member of the party was brooding over his, or her, own personal grievances.  Mrs Pott was regretting the loss of a beau; Mr Pott his rash pledge to horse-whip the Independent; Mr Winkle his having innocently placed himself in so awkward a situation."
This chapter ends with the Pickwickians gathered together at Bury St Edmunds when Sam brings Mr Pickwick a letter.  This is from Dodson and Fogg, solicitors in London who are acting on behalf of Mrs Bardell.  She is suing Mr Pickwick for fifteen hundred pounds for "breach of promise of marriage".  Mr Pickwick decides to go to London to see these solicitors in a few days time.
Chapter 19 starts with a lovely description of the September morning which has been set aside for the shoot.  "The sky was cloudless; the sun shone out bright and warm; the songs of birds, and hum of myriads of summer insects, filled the air; and the cottage gardens, crowded with flowers of every rich and beautiful tint, sparked, in the heavy dew, like beds of glittering jewels.  Everything bore the stamp of summer, and none of its beautiful colours had yet faded from the dye." 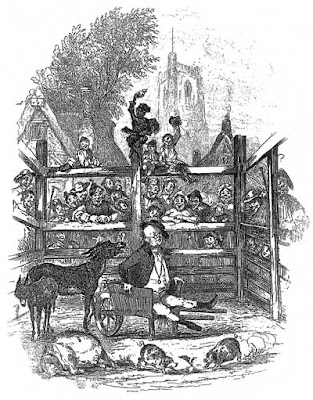 The rest of the chapter is very funny as Dickens describes the Pickwickians on the shoot with Mr Wardle.  As Mr Pickwick still has difficulty walking it is decided that Sam will push him in a wheelbarrow.  Neither Mr Tupman nor Mr Winkle know anything about shooting and it is amazing that they do not do injure one of the party.  Early on in the shoot, Mr Winkle asks why the dogs are standing in an unusual fashion.  When he is informed that they are "pointing" he says, "Making a point! What are they pointing at?"

Lunch is taken on land which belongs to a neighbour and includes punch and beer.  Mr Pickwick partakes liberally of the punch with the result he is left sleeping in the wheelbarrow as the others go back to the shoot.  Unfortunately for Mr Pickwick the owner of the land arrives with his gardeners and is very annoyed by the trespasser whom he demands should be taken to the animal pound where the local boys throw vegetables at him.

In chapter 20 Mr Pickwick goes to London with Sam to speak to the solicitors, Dodson and Fogg.  Here Dickens is back in familiar territory and his description of the solicitors' office is excellent.   "The clerks' office of Messrs Dodson and Fogg was a dark, mouldy, earthy-smelling room, with a high wainscotted partition to screen the clerks from the vulgar gaze: a couple of old wooden chairs: a very loud-ticking clock: an almanac, an umbrella-stand, a row of hap-pegs, and a few shelves, on which were deposited several ticketed bundles of dirty papers, some old deal boxes with paper labels, and sundry decayed stone ink bottles of various shapes and sizes." 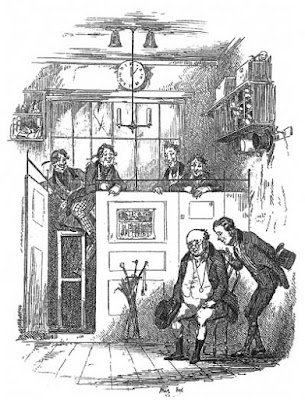 Eventually Mr Pickwick gets to meet Dodson and Fogg and asks them if they are going to proceed with the action.  On hearing that they are and that the damages are set at £1,500, Mr Pickwick leaves saying they will be hearing from his solicitor.  Luckily Sam intervenes just before Mr Pickwick is about to hit Mr Fogg who had been antagonising him.  They go to a nearby inn as Mr Pickwick needs a reviving glass of brandy and water.  Here they meet Sam's father, Mr Weller, otherwise known as "the old 'un".  Sam's father recognises Jingle from his son's description and knows where he is - he is in Ipswich.  Mr Pickwick decides to change his plans and go there.  However before he does he needs to speak to his solicitor, Mr Perker.  As this gentleman is not in his office, Mr Pickwick sets off to the Magpie and Stump in search of his clerk, Mr Lowten.  The chapter ends with Mr Pickwick settling down to listen to a story told by an old man about the Inns of Court.  We will have to wait until the next instalment to find out what the story is about.