The 39 Steps by John Buchan

The 39 Steps was written by the Scottish author John Buchan (1875 - 1940) and is set in May and June of 1914 just before the outbreak of the First World War.  It was first published in Blackwood's Magazine in 1915 and was so successful it was later published as a book.

The story is a classic spy story which involves a murder and an exciting chase through the hills of Southern Scotland as the hero tries to escape from both the police and the murderers.  The hero of the book is Richard Hannay who has arrived back in Britain after working in Africa.  He is finding London very boring when he meets a stranger who says he is fearful of his life.  This man explains he is a spy and that he is following a group of German spies called the Black Stone.  Hannay allows this man to stay in his flat but a few days later returns home to find him dead. Hannay finds the man's notebook which is written in code. Realising that he might be in danger, and be accused of murder, Hannay leaves London thinking it might be safer to go into hiding in Scotland. Whilst staying in an inn, Hannay manages to decipher the code in the notebook which mentions the Black Stone and the 39 steps.

The description of the chase through the hills is exciting and the author obviously knows this area well as the couple of quotes from the book demonstrate.

"The station, when I reached it, proved to be ideal for my purpose.  The moor surged up around it and left room only for the single line, the slender siding, a waiting-room, an office, the station-master's cottage, and a tiny yard of gooseberries and sweet-william.  There seemed no road to it from anywhere, and to increase the desolation the waves of a tarn lapped on their grey granite beach half a mile away."

"The land was so deep in peace that I could scarcely believe that somewhere behind me were those who sought my life: ay, and that in a month's time, unless I had the almightiest of luck, these round country faces would be pinched and staring and men would be lying dead in English fields".
Initially Hannay is fortunate in the people he meets in the hills who all help him - however his luck runs out when he is caught by the spies and locked up in a storeroom.  Luckily he finds some dynamite and uses this to blast his way out.  He reaches London and goes to the Foreign Office where he meets Sir Walter Bullivant, a relative of one of the people who had helped him in Scotland. Hannay is let into some military secrets and ends up taking charge of a police operation and successfully works out that the 39 steps refer to the steps at a coastal site.  The spies are caught before they can reach their yacht moored at the bottom of the 39 steps.

This is a story very much of its time - some of the attitudes portrayed would not be tolerated today, being regarded as racist and chauvinistic now.   There are no women characters of any note in the book which differed from the film version I had seen where the hero and a woman are pursued across the hills!  Buchan admitted he didn't do female characters!  The book was quite fast moving especially in the beginning but there were a lot of rather unbelievable co-incidences - especially when the hero takes charge of the police operation!   I felt the last few chapters disappointing - I had no idea what the 39 steps were but did expect something more exciting than a flight of steps down to a beach.

Although I was glad I had read this book, as it is regarded as a classic, I doubt if I will read any more books by this author. 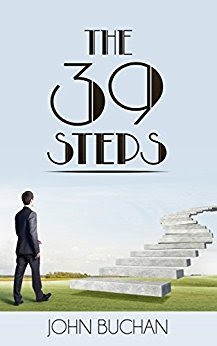