Death of the Demon by Anne Holt 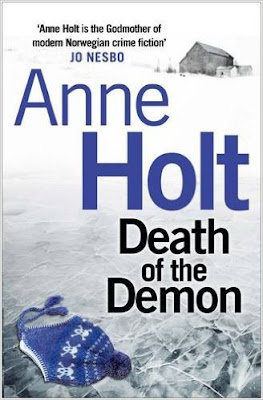 Death of the Demon is the third book in the Hanne Wilhemsen series featuring the Norwegian detective.  Hanne has now been promoted to Chief Inspector but seems to have difficulty delegating tasks and keeping her whole team involved.  She is reprimanded by her superior and seems to accept his criticism. However she doesn't seem to change as she gives the two young detectives tedious work to do while she pursues other leads with Billy T, who has now left the drug squad to join her team. Hanne seem to be missing Hakon, the police attorney who worked with her in the previous books.


In this book the director of a children's home has been murdered and there are lot of suspects including her husband, her lover, members of staff and one of the children, Olav who has gone missing.  In addition to the investigation of the murder, we also find out quite a lot about Olav who has special needs and his mother's difficulties with him.  Although she wanted help, she was unhappy when Olav was taken away from her.  I thought the problem of their relationship was well described and I liked like the technique of giving a voice to the mother so we begin to understand the challenges of bringing up a child with special needs.  Olav is also given a voice so we can begin to understand his difficulties.
In this book we find out a little more about Hanne's relationship with her long term partner, Cecilie and that Cecilie wants them to have a child but Hanne is against this proposal but we don't know why.
I felt the ending was ambiguous and I was left wondering who actually committed the murder although this did not detract from my enjoyment of the book.  I won't spoil this for people who haven't read the book yet.  I like the way Hanne is developing as a character in this series but Billy T is my favourite!  I am certainly planning to read more books in this series.