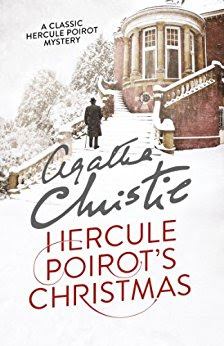 I chose to read Hercule Poirot's Christmas, which was published in 1938, for the Literary Christmas Challenge as it seemed very appropriate for the time of year.  In a letter at the beginning of the book, Christie writes to her brother-in-law that she hoped he liked the book as he had complained that her murders were becoming too refined and he wanted "a good violent murder with lots of blood!"  There is certainly plenty of blood in this novel both in the literal sense and in the ties which bind the family together.

The story takes place in a country house where a family has gathered for Christmas.  The house belongs to an elderly man, Simeon Lee, who lives there with his son Alfred and his wife Lydia.  Simeon has invited the rest of the family for Christmas including his son George who is an MP with his wife Magdalen and his other son David and his wife.  David has been estranged from his father after the death of his mother. The arrival of Harry, the eldest son and black sheep of the family surprises the family as does the arrival of  Pilar Estravados, Simeon's grand-daughter from Spain and Stephen Farr the son of Simeon's old partner from South Africa.

Simeon is not a nice man  - in his younger days he was a womaniser who treated his wife badly. The family gathering was going to be very tense as Simeon's sons, with the exception of Alfred, did not get on with their father.  On Christmas Eve, an awful scream is heard coming from Simeon's room - the door is locked from the inside and when it is broken down Simeon is found brutally murdered. Luckily Poirot is on holiday in the area and is able to help the police in their investigation.  The reader is provided with various clues, the significance of which Poirot explains at the end of the book.

I really enjoyed this "locked room mystery" and had no idea who the murderer was! The plotting was cleverly done and the characters were clearly portrayed - any one of them had a motive for killing Simeon Lee.

This was a most enjoyable read for the time of year.  Although I read a number of Agatha Christie novels many years ago, I am tempted to start reading them again.