Murder at the Old Vicarage by Jill McGown 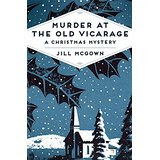 Murder at the Old Vicarage by Jill McGown was the January read for the Saturday Slaughters book group at the Orkney Library.  The group became famous on social media recently as J K Rowling surprised the group by joining them for the discussion of one of her books.

This book is the second book in the series featuring the duo of police officers - Chief Inspector Lloyd and Sergeant Judy Hill.  The book was published in 1988 under the title Redemption and re-released in 2008. My copy was published by Pan Heritage Classics Books in 2015.  According to the publisher's information this book is "Jill McGown's classic homage to Agatha Christie, with a decidedly uncosy twist."

The setting is a vicarage in a small English village at Christmas time.  The inhabitants of the vicarage are the vicar, George Wheeler, his wife Marion and their daughter Joanna who has recently left her husband.  The vicar is suffering from a crisis of faith and is also having doubts about his marriage as he has become infatuated with a woman who has recently moved into the village.  On Christmas Eve the family return to the vicarage to find the body of Joanna's husband in a bedroom.  He has been brutally murdered and the family are all suspects.

What I liked about the book:-
I did find the timings a little complicated although essential to solving the murder.  I found Judy Hill annoying at times as she seemed to be unable to make any decision about her relationship with Lloyd. Perhaps this is resolved in later books.

The author died in 2007 having written 13 Lloyd and Hill novels.  I enjoyed this book, which was an excellent read for the time of year, and I will certainly read more in the series.