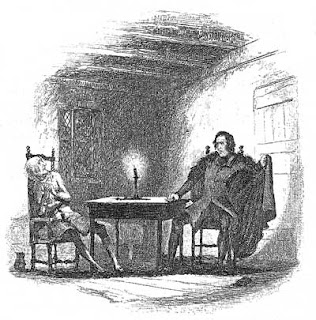 The last chapter ended with Mr Pickwick settling down to hear about the Inns of Court.  At the beginning of chapter 21 he says, "I was observing what singular old places they are."  The old man says contemptuously, "What do you know of the time when young men shut themselves up in those lonely rooms, and read and read, hour after hour, and night after night, till their reason wandered beneath their midnight studies; till their mental powers were exhausted; till morning's light brought no freshness or health to them; and they sank beneath unnatural elevation of their youthful energies to their dry old bones?"

The old man then continues with a Tale about the Queer Client.  This is a sad story about a man who has ended up in the debtors' prison, Marshalsea.  Every day he is visited by his young wife and child. Time passes and his child becomes ill and dies.  "It was plain to those who looked upon the mother's altered face that death must soon follow the scene of her adversity and trial."  After his wife dies, the man promises to revenge those who have caused the deaths of his wife and child.  When he gets out of prison he keeps his promise.  The tone of this chapter was much more serious than previous ones showing Dickens as a social commentator, a role he would develop further in his later books.

Chapter 22 provides some light relief as Pickwick continues his journey to Ipswich on the trail of Jingle.  Pickwick makes the acquaintance of Mr Peter Magnus who worries constantly about his luggage.  The gentlemen stop at an inn which is "known far and wide by the appellation of the great White Horse, rendered the more conspicuous by a stone statue of some rapacious animal with flowing mane and tail, distantly resembling an insane cart horse, which is elevated above the principal door."


Mr Magnus confides to Mr Pickwick that he is going to Ipswich to propose to a lady in the morning. After enjoying a convivial meal with his new friend, Mr Pickwick decides to go to bed.  However, before retiring for the night, he discovers he has left his watch downstairs.  The inn is very old and has numerous twisting corridors.  Eventually Mr Pickwick finds his watch but has some difficulty finding his way back to his bedroom.  "A dozen times did he softly turn the handle of some bedroom door which resembled his own, when a gruff cry from within of  'Who the devil's that?' or 'What do you want here?' caused him to steal away, on tiptoe, with a perfectly marvellous celerity." Finally he reaches his own bedroom and is getting ready for bed when he realises another person has entered the room.  This is a middle aged lady in yellow curl-papers.  What ensues is really funny as Pickwick beats a swift retreat.  Luckily Sam finds him and takes him back to his own room saying, "You rayther want somebody to look arter you, sir, wen your judgement goes out a wisitin'." 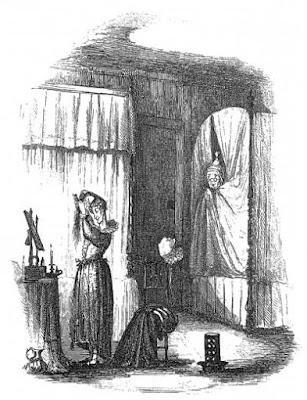 In chapter 23 Sam goes out for an early morning walk in the vicinity of the inn "when the green gate of a garden at the bottom of the yard, opened, and a man having emerged therefrom, closed the green gate very carefully after him, and walked briskly towards the very spot where Mr Weller was standing."  When the man sees Sam, he starts to contort his face "into the most fearful and astonishing grimaces."  However Sam still recognises the man as Job Trotter whom he had met previously in Jingle's company.  Trotter does not give any information about his master but does divulge that he has been visiting the cook at the house with the green gate.  Sam and Trotter agree to meet at the Great White Horse at 8 o'clock that evening.  Sam returns to the inn and informs Mr Pickwick that he has found them -  "that 'ere queer customer, and the melan-cholly chap with the black hair." Sam outlines his plan but we need to wait for the next instalment to find out what happens.