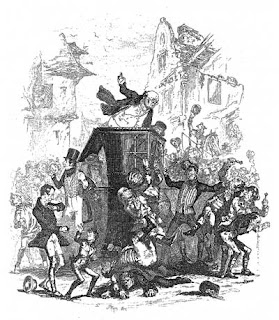 In chapter 24 Mr Magnus successfully proposes to his lady friend having followed Mr Pickwick's advice.  Mr Magnus takes Mr Pickwick to meet his betrothed - she is the middle aged lady in the yellow curl-papers!  She screams when she recognises Mr Pickwick but neither would explain how they knew each other.  Mr Magnus becomes jealous and an argument ensues.  The lady decides to go to the local magistrate and informs him that the two men are going to fight a duel.  Mr Pickwick and Mr Trotter are arrested but Mr Pickwick "resolutely protested against making his appearance in the public streets" so they are taken to the magistrate in a sedan chair which provides some entertainment for the local inhabitants.  "In this order they reached the magistrate's house; the chairmen trotting, the prisoners following, Mr Pickwick oratorising, and the crowd shouting." 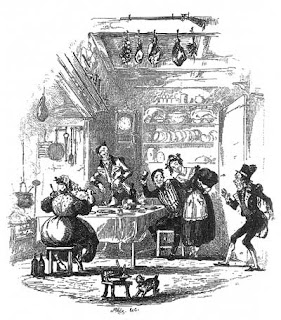 Chapter 25 describes the meeting with the magistrate. The procession stops at the green gate from which Job Trotter had emerged earlier.  This was the house of the magistrate, Mr Nupkins.  With Sam's intervention the matter is quickly settled. Mr Pickwick asks to speak to the magistrate privately and warns him about Captain Fitz-Marshall who has befriended the magistrate's wife and daughter explaining that this is the scoundrel Jingle.  Mr Pickwick and his friends are invited to stay for dinner to ascertain if this man is Jingle. Meanwhile Sam is making friends with the servants below stairs.  Finally Jingle and Trotter are thrown out of the house while Sam takes some time to find his hat needing some help from the pretty housemaid to find it.


Chapter 26 is a short one in which Sam goes to visit Mrs Bardell to pay Mr Pickwick's outstanding rent and collect his belongings.  Mrs Bardell is entertaining two friends who worry that Sam will be invited to stay for supper.  Sam learns that the court action will be going ahead in February or March. "Mr Pickwick was fain to prepare for his Christmas visit to Dingley Dell, with the pleasant anticipation that some two or three months afterwards, an action brought against him for damages sustained by reason of a breach of promise of marriage, would be publicly tried in the Court of Common Pleas; the plaintiff having all the advantages derivable, not only from the force of circumstances, but from the sharp practice of Dodson and Fogg to boot."
Posted by Margaret at 02:37