We have now reached the half-way point in The Pickwick Papers and I am finally enjoying the book.  Perhaps this is because I am now getting to know the characters or simply accepting that this book is different from Dickens' later novels.

It is now nearly Christmas and Mr Pickwick and his friends are preparing to go to Dingley Dell for the wedding.  Before going there Sam asks Mr Pickwick's permission to go to Dorking to visit his father and step-mother (called his mother-in-law in the book).  When he arrives at The Marquis of Granby Sam finds his step-mother seated beside the fire in the bar with "a red-nosed man, with a long, thin countenance, and a semi-rattlesnake sort of eye".  Sam suspects that this man is the deputy shepherd of whom his father had spoken.

Mr Weller arrives and enjoys a drink and a smoke with his son.  The main topic of their conversation is the red-nosed man who seems to be very good at extracting money from women on the pretext of sending handkerchiefs to little children in Africa.  He frequently borrows money which he does not pay back.  As Mr Weller states, "The worst o' these here shepherds is, my boy, that they reg' larly turns the heads of all the young ladies, about here." 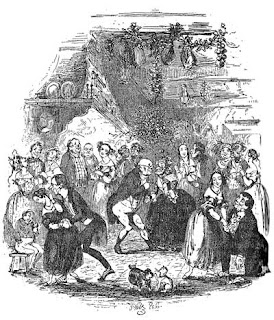 Chapter 28 is described as "a good-humoured Christmas Chapter, containing an account of a Wedding, and some other sports beside."  This is indeed a lovely read for this time of year.  As Dickens says, "Happy, happy Christmas, that can win us back to the delusions of our childish days; that can recall to the old man the pleasures of his youth; that can transport the sailor and the traveller, thousands of miles away, back to his own fire-side and his quiet home!"

Mr Wardle's servant "the fat boy" is still as fat and lazy as ever although Sam tries to warn him about what will happen if he does not curb his eating by telling him a
moral tale about a fat man who gets his watch stolen.

The marriage of Isabella Wardle to Mr Trundle goes off successfully and Mr Pickwick's name can still be seen in the register.  The wedding party return to Manor Farm where they enjoy a hearty wedding breakfast at the end of which Mr Pickwick proposes a toast to the happy couple and to Mr Wardle whom he describes as "a kind, excellent, independent-spirited, fine-hearted, hospitable, liberal man" at which there is enthusiastic applause from the poor relations!

The celebrations continue on Christmas Eve with a party for the whole household held in the kitchen.  "From the centre of the ceiling of this kitchen, old Wardle had just suspended, with his own hands, a huge branch of mistletoe, and this same branch of mistletoe instantaneously gave rise to a scene of general and most delightful struggling and confusion; in the midst of which, Mr Pickwick, with a gallantry that would have done honour to a descendant of Lady Tollimglower herself, took the old lady by the hand, led her beneath the mystic branch, and saluted her in all courtesy and decorum."

The party continued with stories and songs around the fire which leads us to the next chapter - The Story of the Goblins who Stole a Sexton.  There are many similarities between this story and A Christmas Carol which Dickens wrote a few years later.   Gabriel Grub is a grave-digger and sexton who is "a morose and lonely man, who consorted with nobody but himself, and an old wicker bottle which fitted into his large deep waistcoat pocket."  He is going to dig a grave on Christmas Eve and feeling particularly low walking through the village with "the cheerful light of the blazing fires" shining from the houses as he passes.  He sits down on an old tombstone to take a drink from his bottle when he hears a voice nearby.  The description of the graveyard is excellent.  "The cold hoar-frost  glistened on the tombstones, and sparkled like rows of gems, among the stone carvings of the old church.  The snow lay hard and crisp upon the ground; and spread over the thickly-strewn mounds of earth, so white and smooth a cover, that it seems as if corpses lay there, hidden only by their winding sheets."  The voice belongs to a strange creature whom Gabriel realises does not belong to this world.  "The goblin looked as if he has sat on the same tombstone very comfortably, for two or three hundred years."

The king of the goblins showed Gabriel pictures of how other people lived - the pictures of the poor family are very similar to the those shown to Scrooge in A Christmas Carol.  As the night wore on, Gabriel "saw that men like himself, who snarled at the mirth and cheerfulness of others, were the foulest weeds on the fair surface of the earth; and setting all the good of the world against the evil, he came to the conclusion that it was a very decent and respectable sort of world after all."  Following his meeting with the goblins, Gabriel was a changed man but decided he could not stay in the village but went away only returning when he was an old man.  Not everyone believed the tale he told of how he met the goblins on Christmas Eve. 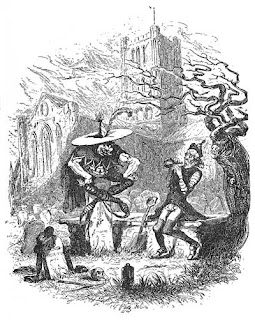