The Man who Went up in Smoke is the second book in the Martin Beck series written by husband and wife team Maj Sjöwall and Per Wahlöö.  The couple planned the 10 books in the series and then wrote them together.  This book was published in 1969 and was very different from the other crime novels of the time.  Beck does not operate on his own but relies on his team to help him solve the cases.  He is not a handsome hero but an ordinary police officer whose marriage disintegrates as the series progresses.  To quote Val McDermid's introduction to the book, "the Swedish duo demonstrated that there was a different way to write about murder.  Through the eyes of Martin Beck and his colleagues, they held a mirror up to Swedish society at a time when the ideals of the welfare state were beginning to buckle under the realities of everyday life."

Beck is on holiday on an island when he gets a phone call from his chief asking him to investigate the disappearance of a Swedish journalist, Alf Matsson, in Budapest.  Beck agrees to sacrifice his family holiday to go to Hungary to investigate this case.  At this time Hungary is behind the Iron Curtain. The title of the book comes from a comment made by an official from the Foreign Office who says that the man has disappeared "but he can't have just gone up in smoke".  This story is different from Roseanna where there is a body although it takes some time to identify.  In this book there is not even a body.

I really enjoyed this book - there are so many twists and turns to the story that the reader is kept guessing until the end.  Of course, by this time Martin Beck has worked out what has happened to the journalist.  The descriptions of Budapest were so evocative that it is now on my list of cities to visit.  "The Danube was flowing past him on its calm, even course from north to south, not especially blue, but wide and majestic and indubitably very beautiful. On the other side of the river rose two softly curved hills crowned by a monument and a walled fortress."

Although Beck is on his own in Budapest, he does get help from the local police officer, Szluka. This proves to be invaluable as Beck uncovers a drug ring in which Matsson was involved.  Beck returns to Sweden without having found Matsson although he has found his passport, luggage and his hotel key.  He does not seem very keen to go back to the island to complete his family holiday and when his wife asks how he is, he replies "not well."

I am certainly planning to read the rest of the Martin Beck series if I can track down the books.  The next book in the series is The Man on the Balcony. 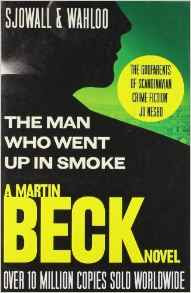