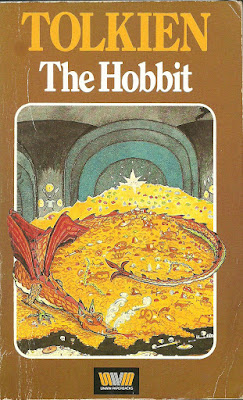 Brona's Books has an interesting readalong this year - to read The Hobbit and Lord of the Rings.

I first read The Hobbit many years ago when I was a student, encouraged by my boyfriend (now my hubby) and then re-read it before going to see the films - this was not a good idea as the films are very different from the book!  I am certainly enjoying reading The Hobbit again although I must admit that I now imagine some of the characters as they appeared in the film!

The copy I am reading is a very old paperback edition which contains some lovely illustrations by the author which I have reproduced here.

The story starts in Hobbiton where Bilbo Baggins, a hobbit, lives a very quiet life enjoying good food and company.  One day he gets a visit from the wizard Gandalf, followed shortly after by a group of dwarves.  They want him to accompany them on an adventure to reclaim some stolen treasure from the dragon, Smaug who lives in the Lonely Mountain.  For some reason they believe Bilbo to be an excellent burglar. 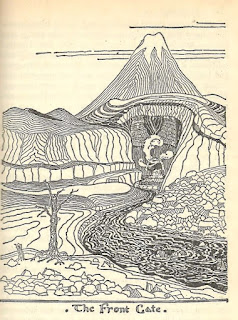 This illustration shows the Lonely Mountain, their final destination. "They knew that they were drawing near to the end of their journey, and that it might be a very horrible end.  The land about them grew bleak and barren, though once, as Thorin told them, it had been green and fair.  There was little grass, and before long there was neither bush not tree, and only broken and blackened stumps to speak of ones long vanished.  They were come to the Desolation of the Dragon, and they were come at the waning of the year."

Although this is a children's book it is beautifully written.  It is also a very good adventure story which keeps the reader's attention throughout.  During the course of the tale Bilbo develops becoming braver and more clever justifying Gandalf's faith in him although he is reminded by Gandalf at the end of the story that "he is only quite a little fellow in a wide world after all!"  To which Bilbo replies, "Thank goodness!"

As I am currently doing a course on the Vikings, I enjoyed working out what the runes said and also looking for other influences which Tolkien borrowed from Old Norse. 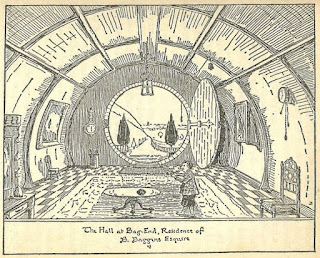 I have thoroughly enjoyed re-reading The Hobbit for Brona's Challenge and look forward to re-reading The Lord of the Rings Trilogy at some point in the future.
Posted by Margaret at 01:29