In March 2016 I signed up for a Read-Along organised by On Bookes to read The Pickwick Papers in instalments as the book was meant to be read.  The challenge celebrated the 180th anniversary of the first instalment of The Pickwick Papers.  The challenge lasted until November 2017 and, although  I did finish the book, I was unable to keep up with the reading schedule and didn't manage a blog post for each instalment.  I did find it hard to remember what had happened in the previous instalment although people reading the book at the time probably discussed each instalment with their friends and family during the month in the same way as TV soaps are discussed today.

I first read this book as a student many years ago but couldn't remember much about the story.  The Pickwick Papers consists of a number of separate incidents involving Mr Pickwick and his friends as they travel around England.  Early in the book Mr Pickwick employs Sam Weller as his servant.   Sam is very streetwise and helps rescue Mr Pickwick from many scrapes.  Although some of the incidents are very funny I found much of the book silly.  I certainly didn't like it as much as Dickens' later books but this could be due to the format which makes it difficult to develop characters in any depth.

I would like to thank On Bookes for organising this Read-Along and for providing additional information about what was happening at the time when each instalment was written.  It was certainly an interesting experience to read a Victorian novel in this way and I may consider doing this again. 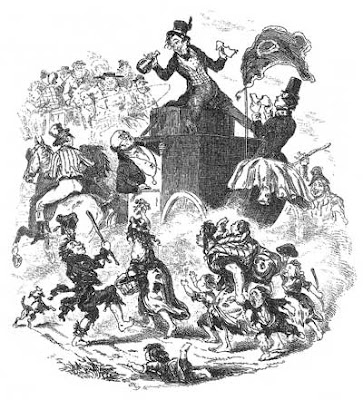 I will conclude this review with the final words from the book - "Mr Pickwick is somewhat infirm now; but he retains all his former juvenility of spirit, and may still be frequently seen, contemplating the pictures in Dulwich Gallery, or enjoying a walk about the pleasant neighbourhood on a fine day.  He is known by all the poor people about, who never fail to take their hats off, as he passes, with great respect.  The children idolise him, and so indeed does the whole neighbourhood.  Evert year, he repairs to a large family merry-making at Mr Wardle's; on this, as on all other occasions, he is invariably attended by the faithful Sam, between whom and his master there exists a steady and reciprocal attachment which nothing but death will terminate."