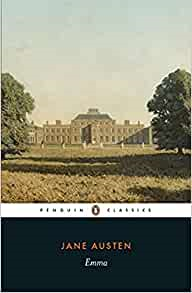 Emma by Jane Austen was published in 1816 and was the last of her novels to be published during her lifetime. The main character is Emma Woodhouse who is 21 years old and described at the beginning of the novel as being ‘handsome, clever, and rich, with a comfortable home and happy disposition’. The novel is set in the fictional village of Highbury where the Woodhouses are one of the main families.  Emma believes that everyone looks up to them. She lives in a large house called Hartfield with her widowed, elderly father. Her elder sister, Isabella, is married to Mr John Knightley and lives in London. The story begins with the marriage of Emma’s governess, Miss Taylor, which seemed to cause some distress both to Emma and her father.


Emma is spoilt both by her father and her governess. Mr Knightley, a family friend, tries to give her advice which she is loath to take. Although Emma can paint and play the piano she lacks perseverance and does not practise often enough to develop these skills. Mr Knightley seems to have a good understanding of Emma’s character pointing out to Mrs Weston that Emma ‘has been meaning to read more since she was twelve years old’. She is very good at drawing up lists of books to read but never actually reads them.


Emma seemed to be lost when her governess moves out as she appeared to be more a companion than a governess. Emma befriends a younger girl, Harriet Smith, whose parents were unknown but believed to be ‘gentry’ and tries to ‘improve’ Harriet. She tries to encourage Harriet’s friendship with Mr Elton, the vicar, as she feels he is a more suitable match than Mr Martin who is only a tenant farmer. This backfires when Mr Elton misunderstands this and proposes to Emma who turns him down. He goes away to Bath and marries a very snobbish woman whose family had made their money through trade. Despite this set-back, Emma continues her match-making schemes throughout the novel but without any success.


I enjoyed this book and found it easy to read. Although this novel describes life in a small English village at the end of the 18th century it also raises issues of class, poverty and women’s role in society. At this time, women of all classes were dependent on men having few choices in life except marriage. There were very few opportunities for ‘genteel’ women in particular, except to become a governess – this was a difficult situation for the woman being neither an employee nor a member of the family. In the novel, Jane Fairfax was nearly forced into this situation although Mrs Elton thought the position she had found for Jane was excellent.


The characters are well described and there are some very funny scenes in the book especially in the descriptions of Mrs Elton. I did not like Emma although I grew to respect her as the novel developed and was optimistic that Mr Knightley would be a good influence on her after their marriage. She was very patient with her father despite his demands and worries about becoming ill. She also demonstrated that she had a good understanding of Frank Churchill’s character and dealt with him appropriately. And finally, there is a happy ending to the novel!