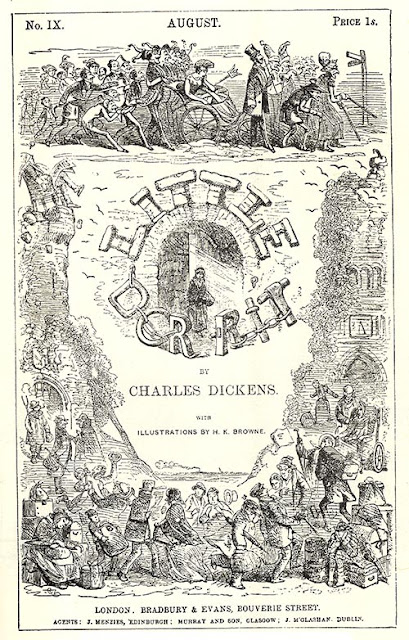 Little Dorrit was the Dickens novel chosen by the "Lunch with Dickens" reading group for 2018.  This group meets every week in the Shetland Library in Lerwick starting the new year with a Dickens novel before moving on to works by other 19th century novelists. Although I have now left Shetland I am trying to read some books along with the group.
Charles Dickens completed Little Dorrit in 1857 although it was set much earlier in the 1820s. The illustrations were done by Phiz.   The book was published in monthly instalments between December 1855 and June 1857 and was very popular with some 35,000 copies of the first number being sold.

Little Dorrit of the title is Amy Dorrit who was born in the Marshalsea Prison where her family was imprisoned due to their father's debts.  The theme of prisons runs throughout the book encompassing both physical prisons in London and France and also mental and moral prisons.  Dickens deals with many themes in this book including poverty and riches, the class structure, the state of the civil service at the time and financial ruin caused by fraudulent investors.

There is a huge cast of characters in Little Dorrit  including the Dorrit family, Arthur Clennam and his mother, the Meagles, Mr and Mrs Merdle, Rigaud, Miss Wade and others.  Some of the characters who stand out are Amy who works so hard providing for her father in prison but cannot admit that she is actually working as Mr Dorrit still considers himself to be a gentleman.  Amy is the only one of the Dorrit family I liked - her sister Fanny is a snob and her brother Edward a waster.  Many of the women in Little Dorrit are strange and seem to be caricatures rather than real women.  Some of these are Clennam's widowed mother who is confined to her wheelchair and his former girlfriend Flora who simpers and talks non-stop acting more like a girl in her teens than a mature woman. Miss Wade is very strange character and I am unsure if she adds anything to the book. I did like Mrs Clennam's servant Affery who is aware of unusual happenings in the house but too frightened of her husband to tell Clennam about these.  The convicted murderer Rigaud who tries to blackmail Mrs Clennam was another strange character of whom Claire Tomalin says "fails to convince at any point."

In addition to the main story about the Dorrits and Arthur Clennam, there are various sub-plots. The first part of the book is entitled "Poverty" and deals with the time when the Dorrits are in Marshalsea Prison.  The second part entitled "Riches" follows the Dorrits on their Grand Tour of Europe after Mr Dorrit is released from prison when it turns out he is actually an heir to a large fortune.  I did like the descriptions of London and the various locations abroad - Dickens is excellent at describing places so that you can picture them.  One example is Clennam's old house in London where his mother still lives.

"The gaunt rooms, deserted for years upon years, seemed to have settled down into a gloomy lethargy from which nothing could rouse them again.  The furniture, at once spare and lumbering, hid in the rooms rather than furnished them, and there was no colour in all the house; such colour as had ever been there, had long ago stared away on lost sunbeams - got itself absorbed, perhaps, into flowers, butterflies, plumage of birds, precious stones, what not."

Dickens's descriptions of the Marshalsea are based on his own  experience of this prison as a child when his father ended up here as a debtor. "Thirty years ago there stood, a few doors short of the church of Saint George, in the Borough of Southwark, on the left hand side of the way going southward, the Marshalsea Prison.  It has stood there many years before, and it remained there some years afterwards; but it is gone now, and the world is none the worse without it."

Amy does not enjoy her new life as a lady of leisure, and does not take part in the hectic social life on the continent instead preferring to sit and watch as this description from Venice illustrates.  "In this crowning unreality, where all the streets were paved with water, and where the deathlike stillness of the days and nights was broken by no sound but the softened ringing of church bells, the rippling of the current and the cry of the gondoliers turning the corners of the flowing streets, Little Dorrit, quite lost by her task being done, sat down to muse.  The family began a gay life, went here and there, and turned night into day; but, she was timid of joining in their gaieties, and only asked leave to be left alone."

Dickens's satire of the civil service, which he calls the Circumlocution Office, is cleverly written although a bit repetitive.  Nothing is ever achieved by this office and its reason for existence seems to be to seems to employ the useless sons of gentlemen (the Barnacles of the book).

Overall the story is quite pessimistic but redeemed at the end by the love of Amy for Arthur.  The ending does tie everything up so we know what has happened to all the characters. I did not like this book as much as some of the other Dickens's novels I have read and feel that some judicious editing of the book would have improved it.  I did, however, enjoy the descriptions, some of the characters and the author's commentary on the society of the time.  I was glad I persevered although I would probably need to read the book again to work out some of the complicated plots. 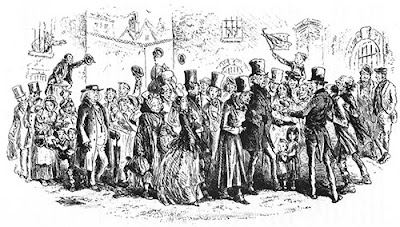