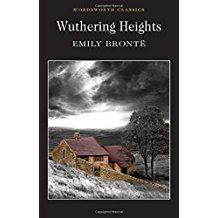 Wuthering Heights, which was published in 1847, was the only novel written by Emily Brontë who died the following year at the early age of 30.

I read a survey recently which named Wuthering Heights as a book which many people had difficulty finishing. I did not find this to be the case - in fact I read it quite quickly as I was keen to find out what happened to the characters.  I had never read this book and mistakenly believed it told the story of the love affair between Catherine and Heathcliff. However there is so much more to the book than this. It is a story of love and passion but also of hate and revenge. It deals with the themes of class and inheritance. It could be classed as a gothic tale as there are supernatural elements in it.

The story is told by two narrators - Lockwood, a gentleman who has moved up to Yorkshire from London, and Ellen (Nelly) Dean who is Lockwood's housekeeper and a local woman. The story opens when Lockwood decides to visit his landlord, Heathcliff, at his home, Wuthering Heights, situated on the moors. Lockwood is somewhat disconcerted by the inhabitants of the house who are not very welcoming. In addition to Heathcliff there is also a young woman whom Lockwood initially mistakes for Heathcliff's daughter and a young man who seems to be a kind of servant. Heathcliff is described as "a dark skinned gypsy, in aspect, in dress, and manners a gentleman." The weather worsens and Lockwood has to stay the night at Wuthering Heights. He has a very disturbed night culminating in a "nightmare" when he tries to close the window - his arm is grasped by an ice cold hand and a woman's voice screaming "Let me in, let me in!" When Lockwood asks who this is the voice replies "Catherine Linton. I'm come home, I'd lost my way on the moor." In order to shake off this creature, Lockwood pulls its wrist on the broken pane of the window "until blood ran down and soaked the bedclothes."

When Lockwood eventually returns home, he becomes ill and persuades his housekeeper, Nelly, to tell him about the inhabitants of Wuthering Heights to help pass the time. Nelly knows a lot about the families in the novel as she was brought up in the house when it belonged to a family called the Earnshaws. They already had two children Catherine and Hindley when Mr Earnshaw returned home from market one day with a "dirty, ragged, black-haired child" who was named Heathcliff. As time passed, Heathcliff was treated very badly by Hindley although Catherine developed a very close relationship with him.

To prevent giving away the plot I will not go into any more detail about the story which follows the lives of Catherine and Heathcliff and the next generation. I really enjoyed this book and feel this is one I will read again. I liked the way the author portrayed the various characters - there was such a contrast between the inhabitants of Wuthering Heights and the more refined, upper class Lintons who live at Thrushcross Grange. Although there were few characters I actually liked, I did admire the way the author developed them throughout the novel. The plot was cleverly worked out and I was surprised that the ending was as positive as it was. I particularly liked the descriptions of the moors and the seasons. I felt that the use of two narrators worked well giving the reader contrasting views of the characters and events.

I feel that Emily Brontë was ahead of her time in writing Wuthering Heights. It shows the power of her imagination that a woman who was brought up in the relative seclusion of a parsonage in Yorkshire could write about such a wide range of emotions and characters. I really enjoyed this book and cannot understand why it has taken me so long to read it. In conclusion I would like to quote from the introduction to my copy by David Daiches who states "one of Emily Brontë's most extraordinary achievements in this novel is the domiciling of the monstrous in the ordinary rhythms of life and work, thereby making it at the same time less monstrous and more disturbing."﻿ 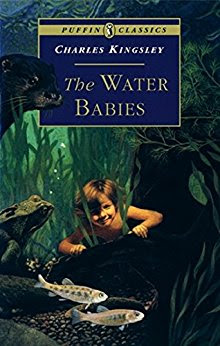 The Water Babies by Charles Kingsley was published in 1863.  It tells the story of Tom, a young chimney sweep, who finds himself in the room of a little rich girl by mistake.  He runs away and ends up in a river where he changes into a water baby.  The rest of the book describes his adventures as he travels down the river and out into the sea.  This is a journey of redemption as he struggles to become "good".  At the end he is turned back into a human becoming a great scientist - "he is now a great man of science, and can plan railroads, and steam-engines, and electric telegraphs, and rifled guns, and so forth."

Although I do enjoy Victorian novels, I struggled to finish this one.  I found the long lists of words irritating and I did not like the religious overtones although I realise that The Water Babies is a moral tale aimed at Victorian children.  I found the book boring and would have given up had it not been for the reading challenges.  I can understand why this book went out of favour during the 20th century as there are many examples of insulting references to the Irish, Jews, Catholics and Americans. One example will demonstrate this.  "Did you never hear of the blessed St Brandan, how he preached to the wild Irish on the wild, Kerry coast, he and five other hermits, till they were weary and longed to rest?  For the wild Irish would not listen to them, or come to confession and to mass, but liked better to brew potheen, and dance the pater o'pee, and knock each other over the head with shillelaghs, and shoot each other from behind turf-dykes, and steal each other's cattle, and burn each other's homes."

However I did enjoy some of the descriptions and the part in the story when Tom's master Grimes gets his come uppance and is stuck in a chimney.

Although many 19th century novels can still be read and enjoyed today, I do not think this is not one of them.