The Handmaid's Tale by Margaret Atwood 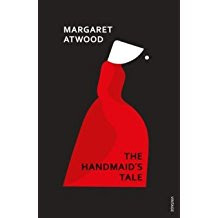 The Handmaid's Tale by Margaret Atwood was first published in 1985. I knew nothing about this book, except it featured on many "classic" book lists, and I did not watch the recent TV series.

The Handmaid's Tale is set in the USA in the 21st century and is sometimes described as being science fiction although I would not classify it as belonging to this genre. The author describes the book as "speculative fiction". In the novel, the American government has been overthrown by a fundamentalist Christian movement and the theocratic state of Gilead created. This society is a very controlled one in which no-one has any freedom. People are constantly supervised by the Eyes and any transgressions dealt with severely. Women are subjugated and cannot hold property, read or do anything which might allow them to become subversive or independent.

In the Republic of Gilead people are split into rigidly defined groups. Men are Commanders, Guardians, Angels (soldiers) or Eyes. Women are Wives (of Commanders), Handmaids, Marthas or Econowives. The narrator is a Handmaid called Offred, meaning belonging to Fred, but we are never told her real name. The role of the Handmaids is to bear children for the Wives as fertility has dropped as a result of pollution and radiation.

I found this book very though provoking and still very relevant today - perhaps even more so considering what is currently happening in the United States. The book is well written and I liked how we gradually find out what happened to Offred in her previous life. The book reminded me of 1984 by George Orwell as the characters in both books could trust no-one and felt they were always being spied upon. I liked Atwood's description of the characters, especially Offred, and was optimistic that she did escape at the end of the story.

I feel that this book is certainly worthy of the title "classic" and I look forward to reading more books by Margaret Atwood in the future.

The Daughter of Time by Josephine Tey 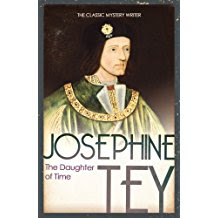 The Daughter of Time was the last book written by Josephine Tey and was published in 1952.  It was voted one of the best 100 detective novels of all time by The British Crime Writers Association in 1990


The book features a police inspector, Alan Grant, who is lying in hospital with a broken leg.  In order to lessen his boredom he decides to investigate whether Richard III did in fact have his two nephews, known as “the princes in the tower”, murdered as the history books maintain.  He is helped in his research by a young American, Brent Carradine.  The impetus for Grant’s research is a picture of Richard III and he asks various people what the portrait tells them about the king’s character.  They all have different opinions including his sergeant who thinks he looks more like a judge than a criminal.


The novel shows how history can be interpreted in different ways at different times.  It also demonstrates how powerful people, in this case the Tudors, can influence what people are told about events and how an individual's character can be blackened.  It explores different styles of historical writing starting with school books.  Carradine  helps Grant in researching what contemporary people wrote about what was happening in England at that time.  The conclusion reached by Grant is that Richard III was not responsible for the murders of his two nephews but that they were later killed by Henry.


I did enjoy this book although I do not have an historical background and am unfamiliar with this period of English history having been educated in Scotland. The book was well written and I liked the main characters. The relationship between Grant and Carradine developed during the novel and I felt that Carradine matured and, encouraged by Grant, was able to find his role in life, deciding to write a book.


I would have liked to have seen references for the books used by Grant to develop his argument although Wikipedia suggests that two of these books were fictional having been invented by the author.


This novel certainly emphasises the importance of not taking everything that is written at face value but in understanding who the author was, when they lived, their background and their motives in writing what they did.  This is as important today in this age of “fake news” as when reading historical documents.


I would like to finish by quoting a discussion from chapter 3 in the book when Grant asks one of his nurses who said the princes were smothered how she knew this and she answered “My history book at school said it.”


“Yes, but whom was the history book quoting?” asks Grant.


“Quoting?  It wasn’t quoting anything.  It was just giving facts.”

If you want to find out more about Richard the Third the Richard III Society can be found here.